Unfortunately this is slightly later that we had originally envisaged but, if confirmed as expected, it will mean a significant increase in the breadth (lots of new work strands), scale (100+ partnerships) and length (5 years) of the programme, as well as presenting a range of funding and support opportunities both for Network members and those interested in establishing a local SFC food partnership.

Our Phase 3 programme will be built around three main work streams: 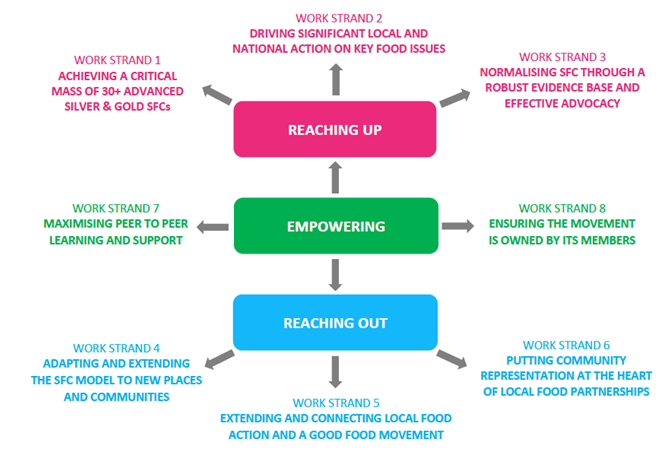 Much of this will require exploring new territory and a test and learn phase before rolling-out more widely. With confirmation of first year funding received, however, we have been able to fast track three grant strands for existing Network members which we are launching today:

Round 1 of the Phase 3 Campaign Grants of up to £5,000 each to be delivered by July 2021 to support them to take part in our thematic campaigns: Sugar Smart, Veg Cities and Sustainable Fish Cities.

Expressions of interest for Pilot Campaigns Grants from members that are interested in working with the SFC team to develop and pilot a new campaign which would contribute to driving local and national action on key food issues.

Round 1 of our Bronze to Silver and Silver to Gold Coordinator Grants. We are offering a total of up to 15 two-year (in principle) grants of up to £10,000 each year.

A new Awards framework will underpin the Phase 3 programme. It has been developed following consultation with and feedback from members of the SFC Network and partners. It aims to reflect recent developments across both the Network and society as a whole as well as strengthen the core elements of a successful local food partnership and programme. A final version of the framework will be published early in 2020.

We look forward to starting this exiting new part of the SFC journey with you!