“I have found it immensely reassuring that our work with the Food Partnership has meant we’ve been able to get a programme together in a very short amount of time.” - Councillor Anne Pissaridou – Brighton and Hove City Council. The Argus newspaper, 1.4.2020 Argus article
06/05/2020 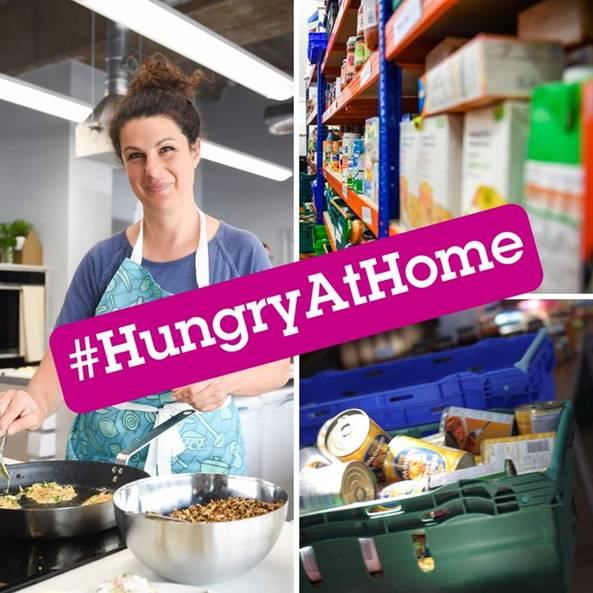 In early March the Brighton and Hove Food Partnership (BHFP) convened a face to face meeting of the city’s Emergency Food Network, usually held quarterly. The timing of this meeting was fortuitous happening just prior to the 23rd March COVID-19 lock down. The invite list was expanded to include many of the local organisations with a potential role in addressing the expected food challenges associated with the lock-down – a ‘crisis meeting’ related to food provision.

This timely convening of key organisations provided a strong foundation for the collaborative work on emergency food provision that has happened since. Having a food partnership and track record on cross sector working around food meant that the city was able to respond quickly. Different business and voluntary sector organisations, statutory bodies and community groups were confident about working together with BHFP acting as the central co-ordinating organisation for the response.

Securing food for vulnerable people through fundraising and co-ordination

BHFP’s initial focus was on working with existing members of the Surplus Food Network co-ordinating the collection and re-distribution of surplus food from closing restaurants, cafés and bars bringing the food to a central hub and then sending it out to neighbourhoods city-wide.
2 things became clear immediately:

“Food Banks were never the answer – and it was really quickly clear they wouldn’t be the answer in this crisis” Emily O’Brien, BHFP

Immediately following the ‘crisis meeting’ BHFP launched a crowd-funding appeal for £15,000 to buy emergency food in bulk from catering wholesalers in the city. The target was quickly reached and doubled to £30,000. When that target was reached the City Council provided match-funding of £30,000 to support the effort to purchase emergency food.

The Council also provided grant funding to BHFP to manage and co-ordinate the emergency food distribution and helped to secure a local secondary school as the premises for the food processing hub. 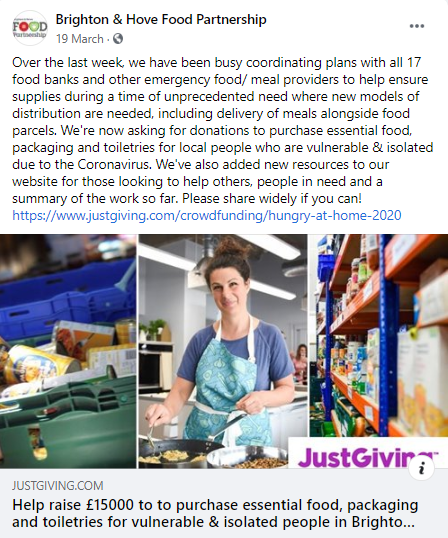 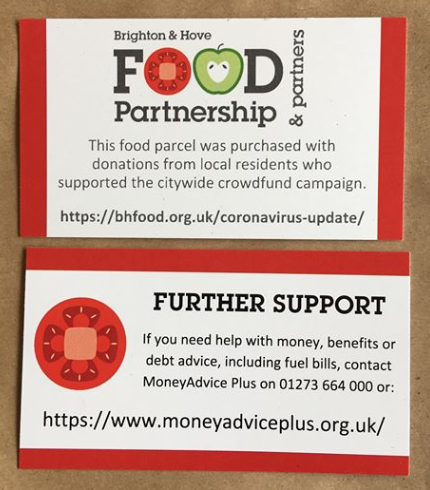 BHFP now co-ordinates the central food processing hub where purchased and donated food is collected and packaged into individual food parcels or food for meal preparation.

It also purchases food for food banks that were in operation prior to the crisis as all have reported increased demand / challenges of food supply. This work includes sourcing food from local farms and businesses as well as wholesale supplies.

It then organises and co-ordinates distribution to new neighbourhood food hubs around the city providing food parcels and cooked meals to vulnerable families and individuals. 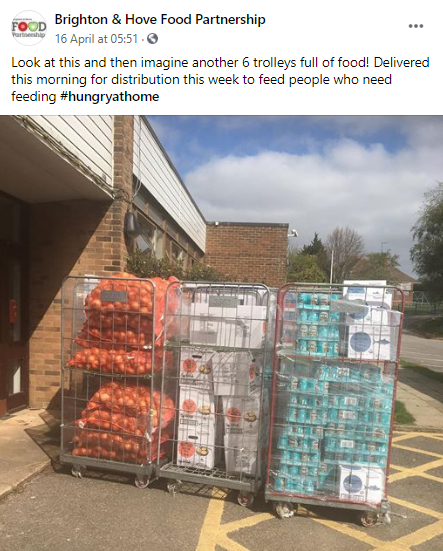 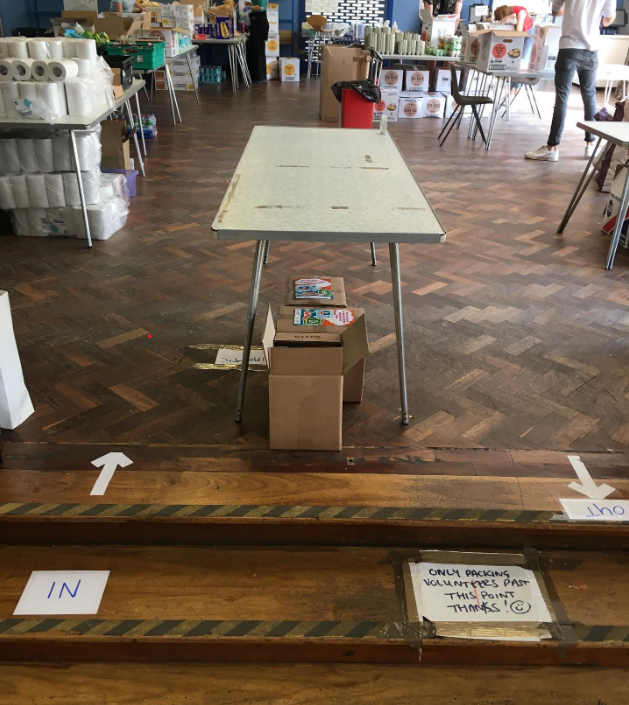 “…it’s been an incredibly fast moving and connected response, led by Vic Borrill and her team at Brighton and Hove Food Partnership. I dread to think how many hours the remarkable Vic has clocked up in the last three or four weeks but I’ve yet to encounter her with anything but a positive attitude.” - Iain Chambers, Director of Brighton Food Factory

Since the initial co-ordination meeting in early March the BHFP has taken a central role in supporting the City Council’s food-related response to the crisis.

BHFP have also been involved in helping the Council set up their Community Hub help-line – a central service to help navigate, map and untangle who is doing what and who can provide necessary support – a system of triage to prioritise provision and avoid duplication.
“We’re supporting the council to do that navigation and improve signposting who’s supporting whom” - Emily O’Brien, BHFP

The BHFP and collaborating partners are not just taking a short-term view of the immediate crisis.

“Whilst I am so proud of the way the city has stepped up and responded to a 4-fold increase in need for emergency food we are really aware that this crisis response needs to be a short term solution. We have been working with national organisations to emphasise the message that people need money not emergency food parcels. BHFP has been providing information to the Food Foundation, DEFRA and Sustain to help those formulating national policy to have some on the ground examples.

Looking ahead BHFP is also working to look at ‘what next’ in terms of supporting people with access to food in the coming weeks and months. Throughout this we have been clear we do not want to create dependence on emergency food, we want to ensure that food is provided with dignity and choice, we want to support our local economy and supply chains and we look forward to the day when across the city people can sit together around tables in shared meal settings and eat together.”
Vic Borrill – Director BHFP

Collaborating organisations involved in the emergency food provision effort include:

The COVID-19 response has had a significant impact on the BHFP team.
“We have had to close (our) community kitchen and suspend our community gardening. (Our response) affects our overall staffing (staff on furlough). We have had to ask funders to let us ‘repurpose’ funding to respond to the emergency although we have also had additional funding as they have asked us to lead the community/council response. Like others we have had to adapt to home working and find new ways of meeting – for example our emergency food network have met by zoom.” - Emily O’Brien

The BHFP provides a source of clear, easily accessible, up-to-date information through the BHFP website and particularly the BHFP Coronavirus update 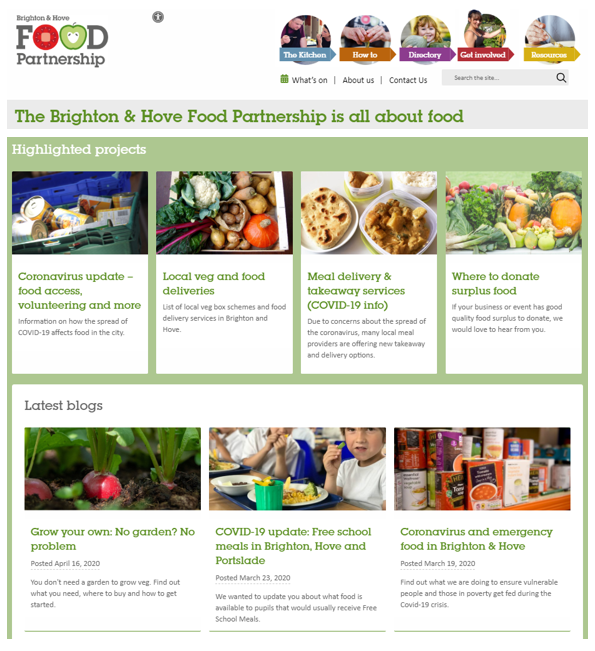 Moving at the speed of trust

The organisations collaborating in Brighton and Hove’s response to COVID-19 – including BHFP – have recognised the importance of strong existing relationships in the food sector, the need for generous leadership and a high level of trust.

The recognition of BHFP’s role in bringing this response together highlights the value of cross-sectoral food partnerships in rising to the challenge of an emergency such as COVID-19.

“Communities have moved much faster than the government, councils, big charities and funders, corporations and philanthropists. Without even so much as a handshake … people who already trusted each other because of their existing connections, agreed to move with safety, purpose, determination and speed to get help and reassurance that same day to those that needed it most.”

“Most of the participants in (the) core group of organisations were already connected in some way, part of the city’s food and community ecosystem. We trust each other and I like to think that this trust will have deepened in these turbulent few weeks.” - Iain Chambers, Director of Brighton Food Factory in his blog: Make do - Travelling at the speed of trust

Looking for more information on local responses to Covid-19 in the UK? Find out more

Connect with other radical food retailers, share problems, find solutions and learn from each other via Better Food Traders.

Bristol Food Policy Council secured strong references to food in the Health and Wellbeing Strategy. The HWB has a key strategic aim to use ‘our combined influence and commissioning to support work to tackle obesity, nutritional deficiency and food poverty’. The Health and Wellbeing Strategy has 10 key priorities, one of which is food (page 5). The aim is ‘to create a healthier, more sustainable, more resilient food system for the city to benefit the local economy and the environment’.