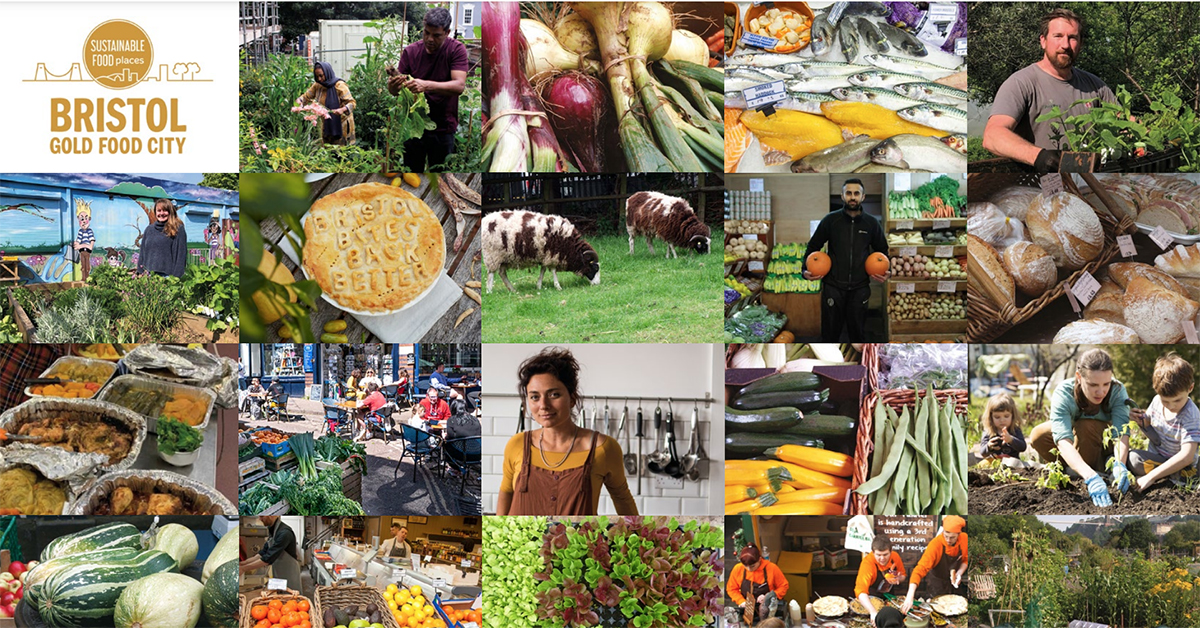 About Bristol Going for Gold

The initiative drew together major actors in the city – including the local authority – to strategically and collaboratively take action on a number of critical key food themes (Urban Growing; Food Equality; Eating Better; Buying Better; Food Waste; and Community Action), convening regular key stakeholder meetings and monitoring progress against action plans. The initiative was led by the Bristol Food Network .

Theme leads, mostly represented by partner organisations, were responsible for ensuring that the systems approach of the initiative were acted upon and formed a significant part of the initiative’s activity. This included Feeding Bristol and local Public Health, addressing food poverty, diet-related ill health and access to food; a specially recruited role to engage food businesses and other parts of the local food economy; a dedicated lead working with local authority and other stakeholders to make change in catering and procurement; Grow Wilder, Incredible Edible Bristol and Bristol Food Producers looking at ways to increase urban growing; and Resource Futures, a waste consultancy, working with key stakeholders to increase proper food recycling and decrease edible food waste.

Central to the initiative was a public-facing campaign and interactive website, led by the Bristol Food Network, encouraging and recording action from individuals and organisations across the same key themes. Sub-campaigns and a varied communications programme sought ways to draw a new and wider audience into the Good Food Movement.

The recruitment of a Community Participation Lead, with specific experience of engaging diverse communities in topics relating to sustainable food was a central element in effectively delivering this work.

Though previous connections had been made with a wide range of community organisations across Bristol, with reach into varied communities, the need was identified for a communications specialist who had a deep understanding of how to reach some of the communities in Bristol who historically have been most disconnected and excluded from conversations on sustainable food. The aim for the role was to provide better access points for culturally diverse communities to access those conversations, have their say and engage on important topics of sustainability in a way relevant to the daily lives of people in those communities.

This role was funded by the SFP Growing the Good Food Movement grant, whilst the budget made available to the Community Participation Lead came from wider funding from Bristol Public Health.

Bristol Food Network’s Community Participation Lead Tara had connections with Feeding Bristol and key teams within Bristol City Council, such as Public Health and Community Development, providing expertise on food poverty and access, as well as routes into certain community organisations. She also engaged with community organisations in specific communities to find spokespeople to talk about food waste in a series of short, bi-lingual films.

The Community Participation Lead chose to focus on five communities in Bristol, including the Kurdish-, Spanish-, Arabic-, Lithuanian-, and Urdu-speaking communities. The films featured individuals from these communities, either as representatives of hyper-local food initiatives, or as individuals with their own interest in sustainable food practices, and highlighted their activities in a way hoped to be relevant and accessible to others in their community.

The work has resulted in the production of five beautiful short films, each of which has been shared on Bristol Food Network’s own social media and through the communications channels of stakeholder organisations, resulting in engagement from individuals within each respective community. One resident said:

“Watching Tara speak in English but showcase her roots by celebrating what many people from my community do is wonderful. This has started a discussion on how we as a community can make a difference to the whole discussion around food waste”.

The eventual intention is that the Community Engagement work will be able to continue, using these films as a starting point to engage wider discussion on sustainable food and how issues such as food waste might be approached in culturally relevant ways in each community.

“The translation in Kurdish is brilliant. I felt it was directly talking to me, and wanted to get involved”.

One example of further outcomes was that the Kurdish film was shared with students at a school in the St Paul’s community (where it was filmed) and the students then participated in a discussion on the benefits of food growing.

Challenges along the way

The recruitment process for this role was challenging in itself, particularly as a CIC with only voluntary directors and freelance positions, each stretched for time already working part time on the Bristol Going for Gold campaign. In an ideal world, Bristol Food Network would have liked to have run the recruitment process more openly – perhaps putting out an invitation across a wide range of networks and asking individuals to come to a participatory session in which the role itself would be co-created and recruited for (following the lead of Bristol Green Capital Partnership who went through this process to recruit a Black & Green Ambassador programme coordinator), but in the end there were time, resource and expertise limitations and the team had to follow more traditional recruitment processes. This in turn limited the reach of their recruitment drive and may have negatively impacted the inclusivity of the process itself.

As for community engagement itself, the complexity of this kind of engagement has been evident throughout. Bristol Food Network team’s experience showed that, on limited time and resources, targeting a few key communities was more impactful than trying to reach ‘everyone’. The other time factor, over and above the hours our Community Participation Lead had available to her each week, is the longevity needed to truly embed conversations on sustainable food. This is the work of years, not months, so a long term vision is vital.

Looking for a new job opportunity in the Good Food sector, work with a small...

The investment includes support for organic farming, creating an agricultural...

From low carbon lunches to a local declaration, SFP Network members are working...

60 food partnerships write to ministers calling on them to include food in...

In conversation with Councillor Alex Collis

Public sector food and catering: How food partnerships can engage and influence