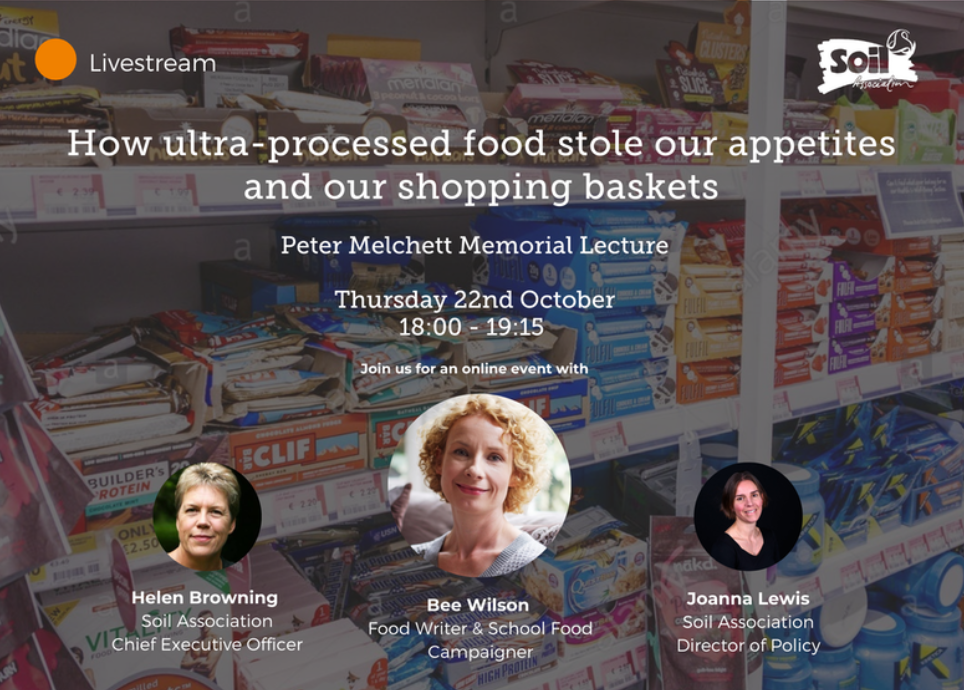 Peter Melchett Memorial Lecture 2020, given by Bee Wilson, Food Writer and School Food Campaigner. Bee will be joined by Helen Browning, Chief Executive Officer of the Soil Association, and Jo Lewis, Director of Policy at the Soil Association. The annual Peter Melchett Memorial Lecture has been made possible by a donation from Lizzie Vann MBE, in Peter's memory.

Join us for a stimulating evening at a pivotal moment.

Covid-19 has shone a fresh spotlight on the UK’s poor diet, with Boris Johnson personally championing an obesity strategy to get the nation eating less and exercising more.

But is the focus on obesity and calorie-cutting the whole answer? Does it matter that the UK consumes the most ultra-processed diet in Europe, with 51% of food in our shopping baskets ultra-processed, compared to 14% in France? Should the promised National Food Strategy follow in the footsteps of France and set a national target to reduce ultra-processed food?

Bee Wilson, Food Writer, School Food Campaigner will talk us through the evidence and why the ultra-processed food challenge should go to the heart of any National Food Strategy. She’ll reflect on what ‘good’ could look like and how we can set about achieving such a cultural transformation.  Bee also writes for the Wall Street Journal, The Guardian, The Sunday Times and The Financial Times. Bee has authored six books, including First Bite: How We Learn to Eat and The Way We Eat Now. Bee co-founded and chairs UK food education charity, TastEd, which is an initiative that offers teachers support, training and resources to deliver a range of lessons around fresh fruits and vegetables aimed at children. Bee is currently writing her first cookbook.

Jo Lewis, Soil Association Policy Director, will share the Soil Association’s perspective, rooted in the experience of Food for Life, our programme to transform food in schools, nurseries and hospitals, which is one of Peter’s proudest legacies. Jo is also Trustee and former Chair of the Food Ethics Council and a Trustee of Sustain. Before joining the Soil Association, Jo was Convenor of Defra’s Sustainable Consumption Roundtable, Chair of the UK Ashden Awards for Sustainable Energy and Head of Policy at environmental think tank Green Alliance.

Helen Browning OBE is Soil Association Chief Executive Officer, RSA Food, Farming & Countryside Commissioner and organic farmer. Helen has held a number of roles in agri-politics over the years, including the Government’s Policy Commission on the Future of Farming and Food and chaired the England Animal Health and Welfare Implementation Group.

Lizzie Vann MBE founded Organix in 1992, an organic children’s food company, based in Dorset. She sold the company to the Hero group in 2008. An activist and political campaigner, Lizzie has campaigned for improvements to children's food, including calling on the British Government to regulate more heavily the issue of pesticide residues in food consumed by children, and ban all synthetic dyes and flavour-enhancing additives in children's food. She was also one of three founding members of the Soil Association's Food for Life programme, and from 2007 to 2009 was the chairman of the Soil Association's Organic Trade Group.

The annual Peter Melchett Memorial lectures aim to challenge orthodoxy and create debate to stimulate fresh thinking on the causes Peter cared about so passionately.

Lord Peter Melchett was Soil Association Policy Director for 18 years. He had been a tireless champion for the environment over decades, including as Director of Greenpeace.